As a young mom, Chantal Alison-Konteh had a village of people around her to assist with all aspects of parenthood. She quickly realized, however, that not all moms had this luxury, especially in Soundview. She wanted to change that.

In 2016, Alison-Konteh organized a community baby shower at the Bronx River Houses. Her plan was to distribute mostly diapers and other supplies to local moms and moms-to-be. With help from elected officials and other community organizations, the event drew dozens of parents and Alison-Konteh didn’t have to spend a dime of her own money. The baby shower helped her understand how great of a need services like these were, so she got to work on making her non-profit organization official.

“I was happy with how the baby shower went. I thought it went well,” reports Alison-Konteh.  “But I was still a little bit discontent because I was like, “well, how are moms getting support consistently?  Like this one-time baby shower is awesome, but these moms need consistent supportl”

Four years later, Alison-Konteh officially established Her Village with the goal of “Inner-city mothers living stable, well and whole.” They celebrated their one year anniversary on February 13, 2021.

Only one month after Her Village was established, the pandemic began and Alison-Konteh felt like she was needed more than ever. Though she couldn’t compare the volume of need from previous years to a pandemic year, Alison-Konteh is sure that it is exceptionally high.

Another foundation of Her Village is providing “Flo Kits” for menstruaters. Packed with pads, tampons and liners, Alison-Konteh and Her Village want to make sure folks who experience periods have the supplies they need during their time of the month.

“I always say if condoms are free, period supplies should be free,” says Alison-Konteh. “They’re very expensive. If I can’t buy food for my family, I cannot buy pads and tampons.”

Her Village kicked off a pilot partnership with community fridges in the Bronx to make Flo Kits more accessible to those who need them. Distributing 50 kits at first to seven Bronx fridges, Alison-Konteh wanted people to be able to pick up a pack at any time or any day, without needing to rely on designated distribution events, which is how she normally gets supplies to people.

One of the first responses the group received about the Flo Kits came from a woman who said how much she appreciated the help.  “It just made her so happy to know this is a resource that was there,” says Alison-Konteh.

Her Village runs almost completely through the work of volunteers. Alison-Konteh is the only full-time employee. Volunteers help pack Flo Kits, open diaper boxes to organize smaller packs, or check in families receiving their supplies.

“I’m so happy I found this organization,” says Leon. “I lost myself, my identity as me, because [as a mom] you no longer are yourself, you’re taking care of a new life.”

Leon was surprised when Alison-Konteh answered an email inquiry about volunteering. She found her purpose in helping others with their own necessities, whether it be a period or taking care of a new baby.

That support system is something Alison-Konteh looks forward to expanding in Her Village. With a desire to offer other services that center mental, physical and emotional wellness, Alison-Konteh sees the organization providing more than essentials. She believes that after those basic needs are met, there’s room for thinking about fulfilling other, more long-term, needs like mental health resources and housing.

“We want to get moms those other needs that aren’t necessarily material,” says Alison-Konteh. “Helping with long-term planning, not just right now.”

Most important, though, Alison-Konteh says she wants to continue to offer a space for people to feel supported.

“It’s really about the community and just making sure that the people we serve feel seen,” she says. “It’s more than just ‘here’s some stuff.’”

Free Flo Kits can be found at the following community fridges: 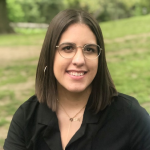