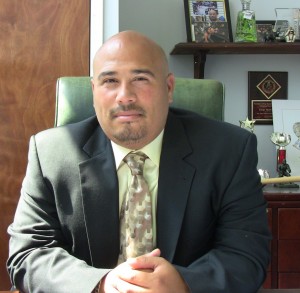 When he delivered his state of the borough address on Feb. 24, Bronx Borough President Ruben Diaz Jr. gave a shout out to Jorge Medina’s company, the first Latino-owned business certified as a vendor by Major League Baseball.

“Right here in Mott Haven,” Diaz boasted, “we have helped Verdero, an athletic apparel and equipment company,” with a $191,000 loan to expand its business.

Verdero is the brainchild of Medina, who grew up in the Bronx listening to salsa, watching baseball, rooting for the Mets but loving Roberto Clemente.

In 2003, the 30-year-old quit his day job to start an athletic shirt company. Within a year, it grew into a baseball equipment company, increased its revenue 10-fold.

Medina says that although his heart has always been in baseball, he had no idea his life was going to revolve around it.

At Fordham University, he played second base until a knee injury sidelined him. After graduating, he took a fulltime job in the health care industry.

“I was making good money, but I was miserable,” he said.  “I wanted the up-close personal experience. I wanted sports in my life.”

Unable to put aside his passion, he coached baseball during the summer. The players wore “trash talking” themed shirts. Determined to inspire his team, he designed shirts with positive expressions such as “Controlling the Game,” a metaphor for controlling life.

The popularity of the shirts led him to found his company, Verdero, which is headquartered near the Third Avenue Bridge in Mott Haven. He moved quickly to expand its product line, adding baseball gloves, wooden bats and batting gloves. Finally, after being approached by Fila International, he bought the rights to the Verdero shoe molds.

Verdero equipment went from being sold person to person to being stocked at such chains as Champs Sports, Sports Authority, Modells and Dick’s Sporting Goods. In its first year, the company’s sales totaled $285,000. Seven years later, it has 21 employees and expects sales this year to reach $2.2 million.

Last April, after a Yankee executive read about Medina in the magazine Crain’s New York Business, Verdero became an official product sponsor of the New York Yankees, supplying bats and batting gloves to the team. Along with a product deal, the Yankees gave Verdero a billboard in left field of Yankee Stadium, next to the Modells advertisement.

“We are excited about our relationship with Verdero, and to partner with a local business which is committed to making a difference in the Bronx community,” said Michael J. Tusiani, the Yankees’ senior vice president for corporate sales & sponsorships.

Medina said the deal has given his company recognition and credibility. He expects sales to grow to $6 million in 2011 as a result.

The company is prospering, he says, because “We especially appeal to Hispanic baseball players,” a market he calls the fastest-growing in the country.

To exploit that niche, Medina signed Hispanic baseball players Carlos Beltrán of the Mets and Javier Vázquez of the Yankees to endorsement contracts.

Medina said he’s driven now by the desire to assist kids who lack the tools to support themselves. He said it’s his way of giving back for everything his parents gave him.

“I had two parents to go home to,” he said. “It wasn’t the case with some of my friends.”

His parents “did whatever it took for me to stay in school,” Medina continued. “Growing up on the Grand Concourse I could’ve been one of those kids who didn’t have a life outside the Bronx.”

Now he organizes the Verdero Wood Bat Invitational, a summer baseball tournament with games played at Fordham University and Randall’s Island. The league offers 80 young people ages 12 through 18 the opportunity to play competitively and get noticed by scouts.

“I want these kids to experience what I did,” he says.

One of those kids is James Norwood, a 16-year-old senior at All Hallows high school. He dreams of a career in baseball, and says the league has made that dream possible.

“Pitching in front of scouts could lead to opportunities I wouldn’t have,” said James. “It could have a great impact on my baseball career and my future.”