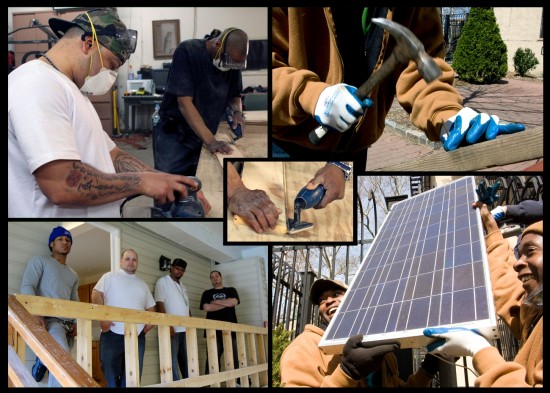 Chances are you’ve heard it all before.

Now, a growing number of programs are seeking ways to help out-of-work Bronxites and those in low-pay, dead-end jobs find more gainful employment, while making the city more energy-efficient and ending wasteful throwaway practices that propel hundreds of air-polluting trucks through Mott Haven and Hunts Point to garbage trains and waste transfer stations.

A $4 million stimulus grant from the federal government to the Consortium for Worker Education aims to leverage the experience of locally-based organizations to train hundreds of residents for green-collar jobs in construction, horticulture, pollution control and energy-saving industries.

The consortium—the education arm of the AFL-CIO’s New York City Central Labor Council—chose to target the South Bronx for these jobs in the green economy: 90 percent of the workers who will receive training must be from the area.

“It’s kind of hard to overstate what an important piece this $4 million is,” said John McDermott, assistant to the chairman at  the consortium. “As far as training grounds go, that’s a lot of money, and it is indeed an investment in the workforce and the people of the South Bronx.”

But Omar Freilla, executive director of Green Worker Cooperatives, which will receive a share of that $4 million, says the money is welcome and the consortium is doing what it can with it, but it’s only a drop in the bucket for places like the South Bronx.

“The government has passed out over $1 trillion in bailout money, mostly to the finance sector,” said Freilla, whose organization combats environmental racism by establishing worker-owned, eco-friendly businesses. “Four million dollars isn’t going to create enough businesses or jobs to put the 20-plus percent of unemployed people in the South Bronx back to work.”

To its credit, the federal government has also upped its support of the Weatherization Assistance Program from $300 million to $5 billion. The funds pay pays for energy-efficient upgrades to low income housing throughout the country. Millions of those dollars will find their way to the Bronx through the state government and create a demand for workers with the skills to build and rebuild green.

Some of the people who will be pointing bricks and installing new windows and insulation will be graduates of the Bronx-based training programs.

But some won’t, says McDermott, who criticizes federal programs for failing to pay much attention to how the well the work gets done and how the people who do it are treated.

“It’s not an uncommon government approach to throw a whole bag load of money at the problem,” he said. “What happens is that money gets out in the street and it’s like the Wild West, with people using day laborers.”

The consortium’s goal is to educate, and eventually unionize, a permanent green workforce in the Bronx to handle the new demand for energy conservation and clean power and to create living-wage jobs in the process. The task, it says, would be impossible if the organizations that will share the $4 million were not already in place.

They have battled successfully against building new power plants and a proposed waste transport hub. They have made Melrose the first neighborhood in the state to win certification as environmentally advanced. They have built energy-efficient green roofs atop many buildings, including the flagship Borough Hall. According to Borough President Ruben Diaz Jr., nearly a third of all the solar panels in the city are installed or being installed in the Bronx.

“The city and the nation can look to the Bronx to see its innovative approaches to adversity,” said Diaz in a written response to questions. “They are rooted in grassroots action, innovation, determination and vision.”

If everything goes according to plan, the Consortium for Worker Education believes the Bronx will become a hive of green industry.

It remains too early to tell. The grant money has not been paid out yet, and some of its beneficiaries are concerned about the lag. The green movement in the Bronx, though active, is still young, and some remain skeptical that these jobs will ever come.

Gene Adams, director of collaborative education at Bronx Community College, thinks the term “green jobs” is a little too fashionable and, therefore, superficial. “I’m a nitty gritty guy,” said Adams. “I like to get down to what we’re really talking about and, right now, I don’t think that has clearly been articulated for us.”

However, he continued, “I think there are people around, and I’ve met quite a few, who are doing a lot to foster that and to bring it forward and to really come up with a workable definition.”

“I personally hold that it always comes from people first. If there was no demand for it, the money wouldn’t come here,” said Freilla.

A version of this story appeared in the June issue of the Mott Haven Herald.