But a controversial proposal could keep playing fields off-limits

Elected officials and the Parks Department describe Randall’s Island as an invaluable resource, and boast that its waterfront pathways provide scenic views and “increased access” to recreation “for the neighboring communities of East Harlem and the South Bronx.”

But the island, only a stone’s throw from the Bronx, has been reachable only from Manhattan or by driving over the Triborough Bridge–until now.

In two years the South Bronx Connector; a 1.5 mile pathway for pedestrians and bicyclists, will open under the historic Amtrak trestle on Randall’s Island making newly- renovated fields, a new tennis center and Icahn Stadium easier for South Bronx residents to reach.

But a controversial decision to restrict use of the fields to private schools on school-day afternoons will keep the facilities off-limits then, despite the new route from Port Morris to the island.

And boaters have complained that the footbridge and Con Edison utility cables underneath the bridge will make navigation at high tide difficult.

Nevertheless construction of the connector nearly a decade after its conception wins applause from local advocates.

“The South Bronx Connector is long overdue,” said Arline Parks, chair of the Land Use Committee of Community Board 1. “For the first time, we are seeing the kind of development that reshapes our area of the Bronx and gives us an opportunity to have a better hold on the community.”

The connector is part of the South Bronx Greenway project, a network of green streets and waterfront trails and parks in Hunts Point and Port Morris, which has gotten a boost from $22 million in federal stimulus funds and is scheduled to be completed in the fall of 2012.

Phase 1 of the connector, a footbridge over the Bronx Kill, located just south of 132nd street in Port Morris, is nearly done. 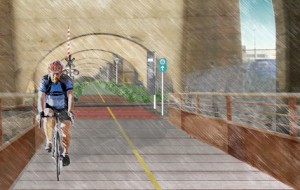 Construction of the bridge is expected to be completed by the end of the summer, but the pathway will not be open to pedestrians and bikers until the full project is completed in the fall of 2011, said Janel Patterson a spokeswoman for the New York City Economic Development Corporation.

Con Ed will incorporate new electrical equipment on the underside of the connector to upgrade power for Icahn Stadium, the Fire Department training center, and a water treatment plant on the island, said Con Ed spokesman Chris Olert.

“Con Ed hijacked the bridge project,” charges Harry Bubbins, director of Friends of Brook Park, which is threatening a lawsuit over the obstacle to boaters.

The cables on the South Bronx Connector are not the only source of controversy.

The Randall’s Island Sports Foundation, a public-private partnership, and the parks department are building new sports fields and renovating existing ones. They will almost double the number of fields on the island, to 66.

But local residents may be barred from using those fields some of the time.

To pay for the maintenance and upkeep of the new fields, the parks department has proposed a concession agreement with 20 independent private schools in Manhattan.

In exchange for $2.2 million, the private schools would receive guaranteed permits for half the fields from 3-6 p.m. during the spring and fall.

Public schools and community-based organization would receive 40 percent of the permits and the remaining 10 percent would be left for other applicants.

The proposal is a second effort to fund the ball fields project through concessions to the private schools.

In 2008, State Supreme Court Justice Shirley Kornreich ruled the plan had not followed the proper public review process and overturned the agreement.

Council Member Melissa Mark-Viverito, whose district includes part of Mott Haven and Randall’s Island, said the new proposal has made some progress, but added she still has philosophical concerns over the privatization of public parkland.

Geoffrey Croft, the president of New York City Park Advocates, said he did not see much of a difference between the initial proposal and the latest one.

“Everybody is not satisfied and wished they had more time, but nobody would have anything without the foundations initiatives.  The island still would have been a sand box with broken glass and everything.”

“Whatever the deal is,” he added, “It is a win for everybody.”